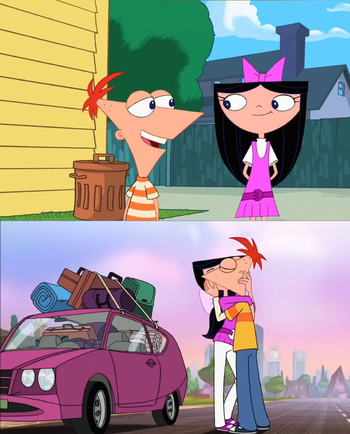 And it only took 221 episodes, 5 specials, and a movie!
Zazu: Oh, just look at you two! Little seeds of romance blossoming in the savanna. Your parents will be thrilled, what with your being betrothed and all.
[...]
Simba: I can't marry her, she's my friend!
Nala: Yeah, it'd be so weird.
— The Lion King
Advertisement:

Do beware, however, that the less fortunate side of a childhood romance also exists. Growing up involves more than just an upgrade to looks; the transitionary period from an impressionable child to a more-grounded teenager/adult takes years, and a lot can happen to the prospective couple during that time. Even if they spend those years staying in touch, both the sweethearts and the circumstances around them may change to the point that a true relationship between them may not last (or in some cases, can't even begin). This trope is about the sparks of a Childhood Friend Romance being in the air — the romance working out is not a qualifying factor.

"Save the World More Often"

Just before Danny carries out his plan to save the world from the Disasteroid, he and Sam have a tender moment, culminating in their first kiss.

"Save the World More Often"

Just before Danny carries out his plan to save the world from the Disasteroid, he and Sam have a tender moment, culminating in their first kiss.