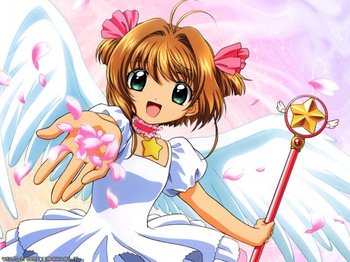 A Cherry Blossom Girl is a common character type in Japanese media, due to Cherry Blossoms being their unofficial national flower and having a special place in their hearts. Most of these characters are named Sakuranote Japanese for Cherry Blossom, but not every character with that name is of this character type (e.g., Sakura Kusakabe from Bludgeoning Angel Dokuro-chan or Sakura Ogami from Danganronpa: Trigger Happy Havoc).

She should have at least three of these characteristics, but it may be okay with two if the flower motifs are heavily emphasized: