Character Level
aka: Level Up 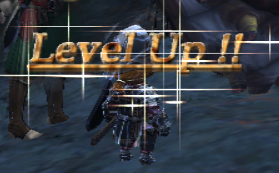 Now I can finally take a level in badass!
...and gain the ability to sit? Oh well.
"Wow! I feel as if I've passed some arbitrary experience value and gained more power!"
— Marcus, Fallout 2
Advertisement:

The concept of "experience", in the Role-Playing Game, is based off the idea that people get better at what they do the more they use their abilities. This is quantified by Experience Points, but is usually rewarded by an increase in character level.

In most games with Character Levels, the main character starts off fairly weak with a low "level", usually described in single digits (e.g. "Lv.1"). When they defeat an enemy, they receive Experience Points, and each time their experience reaches a designated threshold, the character "levels up": Their stats increase by a small amount, they may learn new skills and abilities, and they may recover lost health and or mana. Over time the character becomes stronger allowing the player to successfully take down tougher foes (with higher yields of experience).

Generally speaking, monsters do not "level up" with the player; monsters are usually assigned a fixed experience level which remains the same for the entire game (although it may vary from one area to the next). There are exceptions, however (e.g. Final Fantasy VIII), but this can lead to a phenomenon known as Empty Levels.

Depending on the game, the increase in level may either have a predetermined effect, allow the player to invest into new abilities and stats, or a combination of the two. Some games even tried to make the process more logical by increasing the attributes the character has used most.

Like many Role-Playing Game tropes, this comes directly from Dungeons & Dragons. It occasionally shows up in other genres as well.

Finally, some games may actually use levels to restrict options. For instance, that Infinity +1 Sword may require you to reach, say, Level 50 before you're allowed to even lay eyes on it, let alone pick it up. This comes up in games where it's feasible for a level 1 character to get his or her hands on that sword somehow; typically, this would be an online multiplayer system.

See also Level Grinding, Absurdly High Level Cap, Absurdly Low Level Cap, Class and Level System, Level-Locked Loot, Level Scaling, Spell Levels, Stat Grinding and Super Weight. If a game is said to have RPG Elements, then people usually mean that it incorporates a Character Leveling system into its gameplay in addition to whatever is expected from the genre. No relation to Mook-Themed Level.