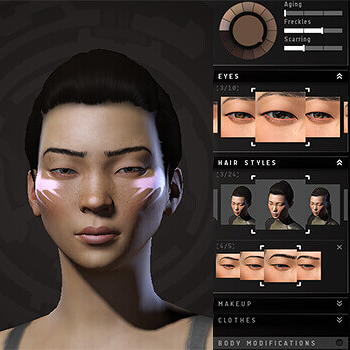 "Step back into the boots of Commander Shepard. A white-ish, black-ish, asian-ish man—woman who... You know what? Let's just go with this guy."
— Honest Trailers for Mass Effect
Advertisement:

This has been around at least as long as Roleplaying Games have existed, and became a Video Game staple well beyond that genre. This is a popular mainstay in wrestling video games, which utilize the term "Create a Wrestler", or CAW, for the feature.

The exact statistics depend on the game, but there are some general ones:

These are chosen either arbitrarily, from a list of presets, or randomly (such as rolling dice), but can also be a combination of the three. Sometimes, customization can also be changed later on if the game allows it (like when a character levels up). Expect Guide Dang It! when mistakes made early on turn out to be permanent.

A Super-Trope to Special Snowflake Syndrome, Pre-Character Customization Gameplay (to give players an idea of their core gameplay loop before doing this).

Compare with Virtual Paper Doll, in which you change your character's clothes, and Class and Level System.