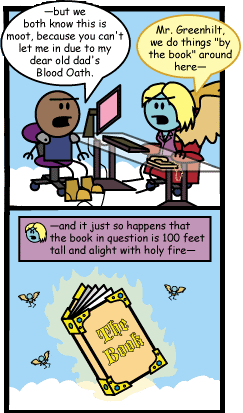 "Heaven isn't full but the car park is. Since 1993 blessed souls have been driving around looking for a space."
— Loads More Lies to Tell Small Kids

A character shuffles off the mortal coil to join the choir invisible. They travel through the Tunnel of Light and come out to find... a numbered ticket dispenser and a long line.

Welcome to the Afterlife Bureaucracy. Many movies have shown the afterlife to be just an extension of the bureaucratic nightmare that plagues the living anytime they have any dealings with an official agency. Complete with "Now Serving XX (XXXXXXXXXXXXXX...)" signs, waiting rooms and obstructive bureaucrats. But if the departed hope to get their Final Reward, they had better make damn sure all the "i"s are dotted and the "t"s are crossed.

Chinese mythology views heaven and the afterlife as a bureaucracy patterned on their own governmental systems (or was it the other way around?), and ruled over by the benevolent Jade Emperor, making this idea Older Than Feudalism. As a result of extensive cultural exchange between Japan and China that has made this trope especially common in Anime and Manga. Judgement of the Dead is usually involved.