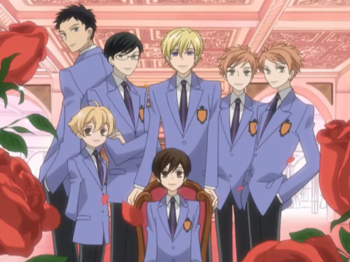 Even the girl note the one in the chair gets in on the manpretty.
Marik: There are no women in Yu-Gi-Oh!. There are only extremely girly men! And I am the most girly of them all!
Pegasus: Keep telling yourself that.
— Yu-Gi-Oh! The Abridged Series

An array of pretty people as eye candy isn't just for the guys. Girls get their Cast Full Of Pretty Boys to ogle too in the name of fanservice. This tends to be less noticeable than its female counterpart because exclusively (or near-exclusively) male casts are already common and expected (thought not always with the intentional appeal to females) and the fanservice tends to be along the lines of "he cooks" or "naked chest" and thus usually objectifies in a different way than in male-oriented shows—unless there are Yaoi Guys involved. The writers sometimes leave it to their audience to retrofit the standard group of friends into the Unwanted Harem if they wish.