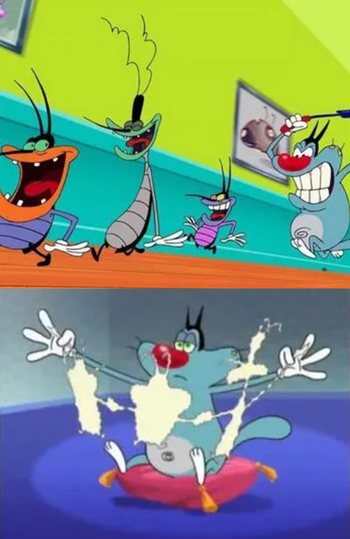 "I hate and I love. Why do I do this, perhaps you ask? I do not know, but I feel it happening and I am agonized."
"You can't live with 'em; you can't live without 'em.
There's something irresistable-ish about 'em."
— Rowlf the Dog, "I Hope That Somethin' Better Comes Along", The Muppet Movie
Advertisement:

A development often used in buddy films and romantic comedy. One person, often a loner type, is paired off with someone else against their will.

They can't stand the person/situation and wishes for his old routine. When they gets their old routine back, they suddenly realizes they miss that person a lot and does everything in their power to get her back. Usually, happens when a bickering pair become Vitriolic Best Buds, or generate an Aw, Look! They Really Do Love Each Other situation, whether it's a fraternal sort of love among buddies, or romantic love.

The phrase is a common magnet for [Popular Saying], But... jokes, such as changing the message to "Can't live with 'em, can't kill 'em" or leaving it at just "Can't live with 'em", since depending on who the subject is about it's perfectly possible to live without 'em.

Compare We Want Our Jerk Back! (when the resident Deadpan Snarker's presence is sorely missed), Belligerent Sexual Tension.