Can't Hold His Liquor
aka: Cant Hold Her Liquor 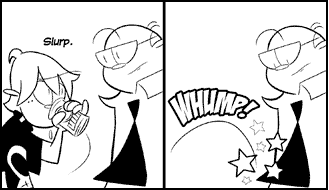 The alcohol effects were liquorty-split.
Howard: You ready to talk about it?
Sheldon: I'm not nearly drunk enough. [takes a sip of beer] Okay.
— The Big Bang Theory, "The Mommy Observation"
Advertisement:

People you should never, ever offer a drink to. As soon as they even taste a drop of alcohol, they either pass out (putting you in danger in case that person should really be awake) or go off the deep end. It rarely gets as far as endless vomiting or a near death experience, or anything else that usually happens after alcohol poisoning, because this is primarily a comedy trope, though it can be used in a dramatic work as well if the person in question is a particularly abusive mean drunk or turns into a disgusting lecherous creep.

This trope is extremely common, and is most often used for comedic effect. If you need to wake him up fast, you'll need a Hideous Hangover Cure.

May overlap with Kissing Under the Influence, Intoxication Ensues, Drunken Master, Lampshade Wearing, and Sentimental Drunk. Polar opposite of Never Gets Drunk.

If instead the character gets intoxicated from something that's not alcoholic at all, they're Drunk on Milk.

Depending on how serious the fiction is trying to be, it can very well be Truth in Television, although it's more common and more fun to exaggerate it past all semblance of realism. It's worth mentioning that this has plenty of basis in reality; the liver processes alcohol and other active compounds with enzymes, and depending on a multitude of factors, from genetics to body weight, it varies somewhat in how efficiently it can carry out the processes required. This crosses over to other beverages, such as tea and coffee; some people can drink enough coffee to leave people wired for hours and still be sound asleep by midnight, while others drink a mug at 10 PM and find it impossible to get any sleep at all.

Seven of Nine is drunk, even though she only drank one glass of champagne.

Seven of Nine is drunk, even though she only drank one glass of champagne.