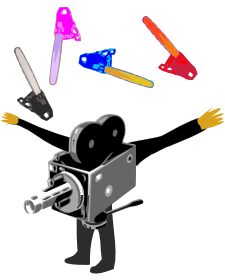 If I miss, I'll end up on the cutting room floor.
This is an assortment of things the camera can do in visual media. You can probably think of a few like slow motion, stop motion, split screen, and forced perspective, but there are hundreds of effects. Look at our list below, and be amazed at what your fellow Tropers have noticed being done with cameras. And if you notice one we've missed, we encourage you to edit this page and add it to our collection of wisdom.
Advertisement:

open/close all folders
Camera Chase
In a documentary or news program, the narrator walks briskly towards the camera for no good reason to convey a sense of "dynamic energy" or some such rubbish. Often parodied by having the announcer hit his head on the camera. May also include instances where the reporter/narrator walks toward the camera, not briskly, but kind of slowly as if to impart a sense of intimacy. A newsman's Power Walk.
Framed Subject
When the camera is positioned so that the subject, usually a person, is framed by something in the background such as a window or a doorway.

This has a psychological effect on the viewer, and is intended to provoke a sympathetic response.

Can be used anywhere but watch for it in news interviews and commercials.

This may be part of a larger trope, using blocking and camera position to influence the viewer. See:

Head Cam
The Head Cam is a helmet with a snakelike appendage that holds a miniature video camera in front of the wearer's face. The wearer is always in focus and centered in the camera's view while their background goes bouncing and jiggling behind. Perspective can be exaggerated by the extreme wide-angle or fisheye lens necessary to get the entire face in the shot at such close range.

The Head Cam is often seen in reality TV shows like The Mole and Fear Factor. Peter Gabriel also used such a camera on his Secret World Live tour for the song "Digging in the Dirt" (you can see it in action on the DVD from this tour).

Similar to the Facecam, except the Face Cam isn't mounted in a helmet.

Pedestal
Refers to moving the camera vertically without changing the angle at which it points (that would be a Tilt). Usage: "pedestal up," "pedestal down".

The name is a reference to the spring or gas counterbalanced stand to which a studio camera is mounted (they can also be power adjustable). This same move can be renamed according to the equipment used, i.e. "boom up", "crane up", etc.

Notice the blur line in the middle.

A diopter is a filter that works similar to a magnifying glass, making a lens focus closer. A split diopter has it on only one side, meaning that one side focuses close and the other farther away. This allows objects at different distances from the camera (usually on the left and right side of the screen) to be in focus simultaneously. (Compare Rack Focus where only one part is in focus at a given time.)

Used to great effect in The Thing (1982), for example, where dark sets disguised the blurred region in the middle of the split shot. Sometimes used by first-time directors as a way to "show off" their technical skills.

Although it can be, and often is, used as a special effect, a scene as simple as two characters conversing might call for a split diopter (or a tilt/shift lens, which provides a similar effect by allowing the focal plane to be tilted so it is no longer parallel to the film) if the characters are not at the same distance from the camera. Of course, many shots are staged with the characters equally distant from the camera precisely because no special optics are needed.

Split Edit
When the video and audio transitions between scenes are not matched up. For instance, a character is describing a place or person. Hard Cut (or dissolve, or whatever) to the featured person or place, while the description continues in voice over. Conversely, a character sets out on a journey, and the roar of a landing jet rudely fades in before the cut to the inevitable Landing Gear Shot. Used to tighten continuity between shots. Also known as an L Cut or a J Cut, from the physical shape of the cut on a film strip (where audio is below video).

Many times used in interviews, cutting to the subject before the question is finished, to show reactions. Often very useful, as the reporter's side of the interview is often shot well after the interview is over — field crews seldom carry more than one camera.

Wet-for-Dry
Wet-for-dry is a term in the film industry for a special effect wherein an actor or prop is filmed in a water-filled tank, then imposed onto the film most often via Chroma Key or similar technology. The purpose of this is either to facilitate Slow Motion or to create the image of a supernatural creature not entirely bound by gravity. Filming in water works most effectively on hair and other long, flexible appendages, so expect this effect to take full advantage of such.

The opposite of wet-for-dry is dry-for-wet, where a subject filmed on a stage is imposed onto a water backdrop to avoid having to film underwater, thus making it possible for actors to do a scene while also being able to, for instance, breathe.