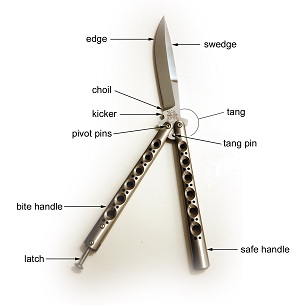 Mindy: Look, I'd love a Benchmade Model 42 butterfly knife.
Damon: [in relief] Oh, child. You always knock me for a loop. You know what? [...] I'm gonna get you two.
Mindy: Two?
Damon: One balisong. Two balisong. That's what you get.
— Kick-Ass
Advertisement:

The butterfly knife, also known as a balisong, is a traditional Filipino knife. Its design, with two rotating handles, allow it to be flipped open and closed. It will usually appear in the hands of a Knife Nut, who will perform a complex, flashy, and noisy flip. Anything beyond a simple and quick opening is Awesome, but Impractical as the hand is vulnerable to a strike disarm throughout the manipulation. Less frequently, a character will flip one open without fanfare and use it to cut something.

The most common and recognizable design is skeletonized: holes in a line along each handle. The holes reduce mass, control balance, and add grip. Traditional balisongs incorporate wood into their handles with brass accents.

Note that butterfly knives are illegal in many jurisdictions, although "practice" balisongs (i.e. with a blank piece of unsharpened metal instead of a blade) usually aren't. In some jurisdictions, such as Finland, they are considered as just ordinary knives. Finnish cutlery company Hackman even produces a foldable puukko just as a balisong. (It is essentially a tool, not a weapon, though.)

The first butterfly knives were manufactured in Spain in 1550. The oldest surviving dates to France 1710. The traditional balisong is said to be called the veinte y nueve because they are 29 centimeters long when opened, while another story goes that it is named after a lone Batangueño who fought off 29 assailants using one.

Not to be confused with butterfly swords, which are single-edged short-swords that are dual wielded and used in Chinese Kung Fu.