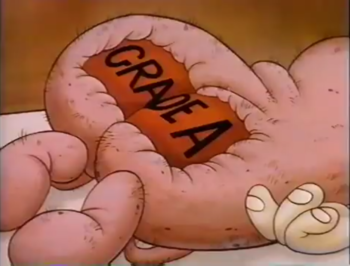 Back in The Wild West, farm ranchers had a very common problem. Sometimes, rude or desperate neighbors would sneak into a pasture and round up as many cattle as they could before taking them to their own pastures, essentially stealing property and potential money from ranchers who are just getting by as it was. They had to come up with a way to not only prove that their cattle were stolen but also to prevent the people who had stolen said livestock from passing it off as their own. Their solution was simple; they would brand the cattle as their own with a heated piece of iron to leave a unique logo that's too specific to copy.
Advertisement:

While mostly associated with cowboys and the west, the practice predates the era by a considerable margin, as there are references to a similar practice as far back as the Roman Empire, as livestock needed to be moved constantly due to war plans and the constant fear of raiders.

Keep in mind that this idea was made long before the invention of modern microchips and scannable tags came around to figure out whose livestock officially belonged to who. And most are thankful for that, as very few both then and now would be brave enough to face a pissed-off bull with the job of putting a hot stick on its rear for a few seconds. As a result of this improved technology, iron branding has been mostly phased out of modern farming practices.

In media, however, an iron branding is a very common version of both torture and slapstick humor, the latter usually being applied to the butt, sometimes with the added side effect of a Rump Roast.

Compare to Slave Brand, Mark of Shame or Pain to the Ass.

Stamped on the ass

Stamped on the ass