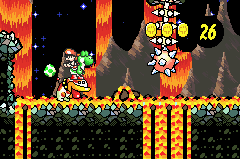 I collected 160 Red Coins and 40 Flowers for THIS?!
"To the true Ridge Racer who has cleared all 39 tours, we introduce these tours of maximum difficulty. The first MAX tour, “Opus 1”, is the ultimate 4-car battle of Class 1 machines. Only 1 in 200 is expected to clear this challenge. There are no prizes. Race for your honor!" (Opus 1)
— Description of the first MAX tour, Ridge Racers (North American version)
Advertisement:

The Extra extra difficult Secret Levels which some games have. They exist largely so that the player can brag to their friends about how awesome they are for winning them. A Sub-Trope of Secret Level, distinguished from its mother trope by the Extreme extreme difficulty as being the only point of these levels. Examples of this trope are, naturally, almost always That One Level (or more technically, That One Sidequest).

Can be set in Planet Heck, but not always. Won't necessarily have a sign at the beginning saying "Welcome to Hell!", but might as well.

Compare Bonus Dungeon, a mostly equivalent trope (a Bonus Dungeon doesn't have to be fiendishly difficult, though examples of that trope still tend to be more difficult than the rest of the game). For the boss version of this, check out Superboss, or alternatively, True Final Boss—though the former may very well reside in the Brutal Bonus Level, while the latter is usually in The Very Definitely Final Dungeon.