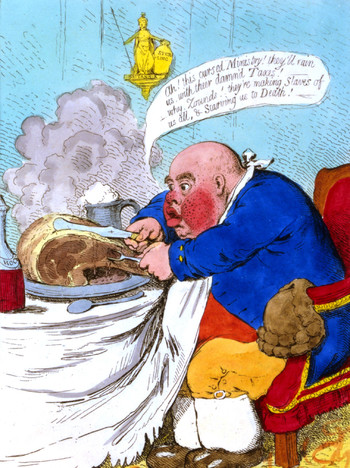 "Oh, this cursed Ministry! They'll ruin me with their damned taxes! — Why, Zounds! They're making slaves of us all, starving us to death!"note James Gilray, "French Liberty and British Slavery", 1792
"I'm going to help you - because nobody ever helped a hick but a hick hisself!"
—Willie Stark, All the King's Men
Advertisement:

A Bourgeois Bumpkin is, generally, someone who enjoys many privileges - or at least enough privileges to be happy - yet suffers from delusions that henote primarily for historical and cultural reasons, this character is Always Male, although there are some exceptions is deprived, marginalized, persecuted, or otherwise disadvantaged. In practice, this character type will tend to overlap with the Bourgeois Bohemian, but a key difference is that, typically, while a Bourgeois Bohemian is depicted having a "bleeding heart" for other people, the Bourgeois Bumpkin has a heart that bleeds primarily for himself. And precisely because the Bumpkin is more likely to see himself as a victim than the Bohemian, he'll tend to complain a lot more.

Another important difference is that while the Bohemian will, for the most part, shy away from proletarian trappings (although proclaiming that they're fine and good for other people), the Bumpkin fully embraces them, or at least embraces them as much as is feasible or plausible. The Bourgeois Bumpkin is as proud to be a bumpkin ("hick") as a Bourgeois Bohemian is to be a hip, "cool" dude. Indeed, much of the irony that proceeds from the Bourgeois Bumpkin is the dissonance between his avowed affinity for all things bumpkinish and his professed sympathy for bumpkins on one hand, and on the other his self-absorbed outrage and indignation at the supposed hardships he faces - hardships that pale in comparison to those of actual bumpkins. To put it another way, while the Bohemian sympathizes and possibly identifies with so-called social outcasts, the Bumpkin believes that he is himself an outcast, even though this is obviously not so.

This character type is described in great detail in Thomas Frank's 2003 book What's the Matter With Kansas: How Conservatives Won the Heart of America. This book, which traces the rise of the new, rawer, and angrier brand of American political conservatism that fully crystallized in The '90s, explains how the radical right appropriated the "class-warfare" worldview of the radical left and retooled it to serve their ends, substituting resentment toward elites' supposed moral depravity (think of the middle-class backlash against royal scandals in Britain beginning in the Victorian era, but much more outré in style) for resentment toward elites' support of the economic status quo. In Kansas and other "red" states, wealthy conservative politicos will take this basic stance in order to appeal to working-class voters, vocally campaigning on cultural issues like abortion, gay rights, and religion, while quietly rewarding the wealthy and corporations with tax cuts, anti-union policies, and deregulation. George Wallace and Richard Nixon are generally considered the first men to employ this tactic, with Nixon referring to it as his "Southern Strategy." Nixon did the same in the northern states with the "silent majority", by appealing to working-class voters who held conservative views on crime, civil rights, and national security.

This trope heavily overlaps with Self-Made Man, especially if the person in question comes from a seriously disadvantaged background. Succeeding in life from a Friendless Background may also lead into a Bourgeois Bumpkin. May also overlap with a middle-aged, jaded Dogged Nice Guy.

Many stories set in the South or the Midwest (particularly the more "western" part of the Midwest) will feature characters of this type. They are often Nouveau Riche - and if the "hick" part of their persona is more apparent than usual, they're bound to have traces of the Corrupt Hick as well. Despite the name, this character need not be a literal hick or even rural; an urban character will do if his traits include political conservatism and a disgruntled and/or entitled attitude toward the world. If such a character ever does gain ultimate power, expect a People's Republic of Tyranny. Related tropes include Angry White Man, AstroTurf, Good Ol' Boy, Lower-Class Lout (when it's an Insult Backfire), Obnoxious Entitled Housewife, Real Men Love Jesus, Schoolyard Bully All Grown Up, Snobs Versus Slobs, and Trumplica.

Of course, it's often pretty subjective as to whether this trope applies, since even the poor of many times and places are still better off than even the kings of others.