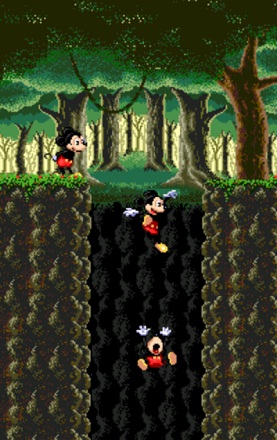 GRAVITY! NOOOOOOOO!
"When you fall in a bottomless pit, you die of starvation."
— What's Her Face, Teen Girl Squad
Advertisement:

One of the longest-standing video game hazards in existence: pits that send your character plummeting to an early grave, usually costing one of the player's lives. In many games, there are sheer-faced bottomless pits nearly everywhere you travel, waiting for you to mistime a jump (or get smacked into it by annoyingly placed enemies).

If the player character does not take damage from long falls as long as they land on a non-damaging surface (as was common in the early days of Video Games), this can be especially jarring. There may be certain levels where you fall many, many, many screens down, but hit the bottom completely unharmed, yet a simple pit will end your life instantly. More egregiously, bottomless pits are almost always instantly fatal, even in games where your character can take a point-blank explosion or a volley of bullets and only lose one point of health. However, the biggest threat to a player's Willing Suspension of Disbelief is the pits which are treated as being fatal, even when they are located above safe landing ground. The screen will simply refuse to scroll down if you fall into it.

With the advent of 3-D and Falling Damage, most "bottomless" pits are shown (or assumed) to be really, really deep pits. Still, one wonders why science labs, factories, and temples have so many deadly drops built in them, or why the building inspectors allow them. Sometimes, the pits are clearly not bottomless but are treated as if they were anyway, because the player would be unable to get back up to the designated path.

Note that, in many cases, not all pits are "bottomless". Sometimes, the designers try to explain their lethality by putting something in them, though this often leads to other cases of weird logic. If the pit has water in it, it's a case of Super Drowning Skills. If there's lava instead, then you likely have a case of Convection, Schmonvection. Other times, there may be deadly chemicals, Spikes of Doom, or a host of other things, which brings us back to Malevolent Architecture. Note also that "bottomless" in this context is a holdover from older English usage, and means "than which there is no deeper".

Watch out for Ledge Bats, which live to knock you into these while you are jumping.