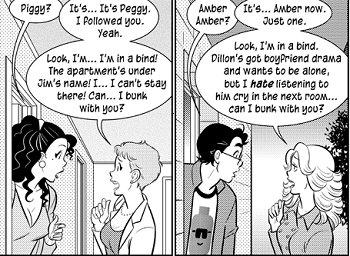 Beginning and end, volume 6. The game of musical apartments continues.
-we came in?

Compare and contrast Here We Go Again!, How We Got Here, Where It All Began. See also Call-Back, Ironic Echo. Often utilized in an And the Adventure Continues ending, with the last scene of the series mimicking the first, regardless of how long it's been running. In music, this is often a component of Album Closure.

Live It Up Tonight

Live It Up Tonight