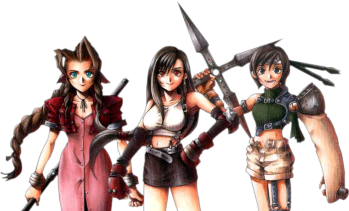 The middle girl is the brawler. Her breasts say so.note There's also the boxing gloves she's wearing, but let's face it, you probably haven't even noticed those, have you?
"Guess the size of a woman's bust is a measuring stick for how strong they are, huh?"
— Rei Hiroe, Black Lagoon
Advertisement:

The tendency for the strongest physical female fighter in a group or cast to also have the largest breasts. Some of the reasons for this trope are discussed on the Analysis page.

A physically strong female without Boobs of Steel is most likely a Cute Bruiser. Compare and contrast with Most Common Superpower. See also Amazonian Beauty.

Note that this trope is not common enough to list aversions. Unless it is lampshaded, it's just an ignored trope. Also note that in general, this is limited to one or two examples per work.

Not related to Balls of Steel, which is about being immune to a Groin Attack.