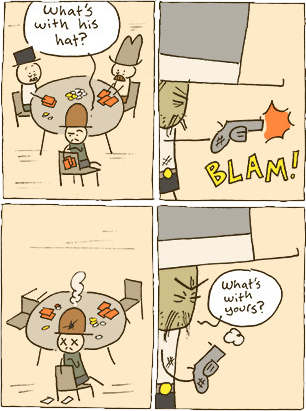 It's supposed to be a ten-gallon hat, but it appears to have sprung a leak.
Starsky: Looks like you just punched your last ticket, amigo.
Hutch: I'm sorry, did you just tough-talk a dead body?
— Starsky & Hutch (2004)
Advertisement:

When the hero (or in some cases the Villain) has just killed someone, often in a gruesome manner, they do a Bond One-Liner.

The classic Bond One-Liner is typically a bad Pun or Obligatory Joke on the manner in which the victim was dispatched. A Bond One Liner can be a snarky response to the now-dead enemy's attempted Pre-Mortem One-Liner, or an Ironic Echo of something they said to the hero earlier. It may be a sign that the character has sociopathic tendencies. Often works on the basis that it Crosses the Line Twice.

Note that while William Peterson's one liners on CSI, David Caruso's one liners on the Miami sister show and Jerry Orbach's on Law & Order are often similar in content, they fail the test for this trope, as Grissom and Briscoe were never the killers, only snarkers. In general, see Quip to Black for cheesy one-liners right before a cut.

If the one-liner is said before killing, or if the killing blow is struck but the one-liner is said before the victim's consciousness fades, it's a Pre-Mortem One-Liner (which, for the record, James Bond says just as often). It's also possible to combine the two, with separate quips before and after killing the victim. If the character is making smartass quips about their own impending death then it's a Gallows Humor version of a "Facing the Bullets" One-Liner.

The Trope Namer is James Bond, who does this in every single one of his films. (The early films were done under the onus of The Hays Code; these quips were used to downplay the violence; later films simply carried on the tradition.) Ditto Arnold Schwarzenegger, but Bonds' have more pun. As a Death Trope, beware of unmarked spoilers.

In Zero Dark Thirty, they add, before it's confirmed that it's Bin Laden (leading to "Geronimo"), "We might have jackpot."

[Trope Namer] The very first instance in the series involves Bond dropping off a man who had just used a Cyanide Pill at the governor's palace.

[Trope Namer] The very first instance in the series involves Bond dropping off a man who had just used a Cyanide Pill at the governor's palace.