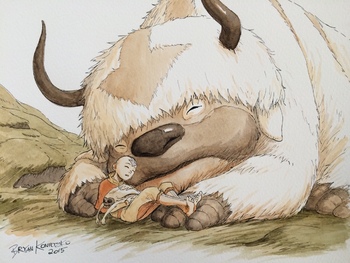 "I guess this means we'll always be together."
"Ares the flier, I bond to you,
Our life and death are one, we two,
In dark, in flame, in war, in strife,
I save you as I save my life."
— The Underland Chronicles
Advertisement:

Bond Creatures choose a human partner to share their power. Often they can reject an unsuitable human partner or reveal a new ability or level of power if its Link and/or Synchronization with its human user is particularly high. In such cases they may form a Mental Fusion or allow the human to see through their eyes. They sometimes double as a Morality Pet.

A magic user's familiar may (depending on specific interpretation) be one of these, as may a Sapient Steed that Only the Chosen May Ride, especially in the case of Dragon Riders. Compare Empathy Pet, Empathic Weapon, Living Weapon, Attack Animal (possibly Equippable Ally) and Mons. In some cases an Imaginary Friend can also function as a creature or person bonded to the character imagining them. Other times, it can be a Symbiotic Possession, or just simply The Symbiote.

They definitely are not frickin sharks with FrickinLaserBeams on their frickin heads, and while there is some overlap we're not talking about the villain's Right-Hand Cat either. Those are James Bond Creatures. Also not to be confused with Bond Girls, which are a different order of creature entirely.