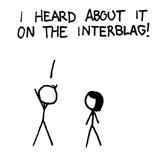 xkcd thinks the name is silly, too.

"Blogosphere" is the term for the interconnections between all the various blogs that exist on the internet. The name was originally coined as a joke, but the joke became so popular that many (especially in the Old Media) mistook it for a real word and began using it in complete seriousness. Memetic Mutation at its finest.

The new, irony-free definition of blogosphere implies a view that no blog is an island: all of them are as part of a massive online community. Or at least that blogs on closely related topics share many of the same readers, so that there is a comics blogosphere, a Boise, Idaho dining blogosphere, rival liberal and conservative blogospheres, etc.

Whether or not the blogosphere can be meaningfully defined as a distinct subset of the internet depends on how well one can draw the distinction between Blogs and regular old webpages.