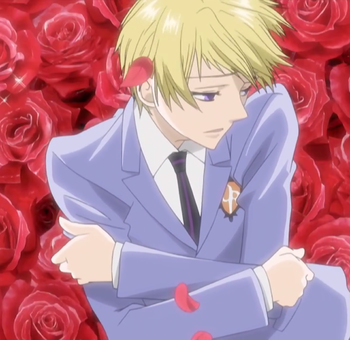 The appearance and behavior of the archetypal bishōnen is often used to explore sexuality and gender norms. Thus, guys in the Yaoi Genre have a tendency to be this.

Contrast Gonk, The Grotesque, and Puni Plush. Also, contrast Hunk which can nonetheless cross over with this trope, such as for Vega from Street Fighter, as well as Bara which is similar to Hunk but it has a good amount of fat somewhere. Pretty girls are known as Bishoujo ("beautiful girl"), but the aesthetics of bishoujo are different, typically emphasizing cute, petite femininity rather than sleek androgyny. See Bifauxnen for ladies who conform a bit more closely to the bishōnen aesthetic. Not to be confused with the Bishōnen Line.