Bigger Is Better in Bed
aka: Biggus Dickus 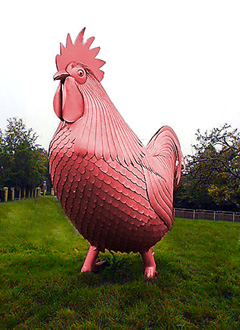 "The bigger the penis, the better the sex."

This assumption is a staple of modern fiction when it comes to Sex Tropes. The basic (mistaken) rationale seems to be that a woman's erogenous zones are located solely in the deepest, darkest, unexplored reaches of her nethers, where only equipment of sufficient size (ie. length) is capable of reaching. Anything less may as well not be there at all.

This trope is the reason why Compensating for Something is, by its very nature, an insult: everybody knows that a real man has a big penis (or at the very least, an average one). A heroic character, when his penis is mentioned (which isn't all that often, except by innuendo), will usually have a big one. Consequently, this is also the reason why villainous or loser characters are portrayed as having a small penis, or a small something else meant to represent a penis. It's a deficiency that makes them bad people, or at least not cool like the heroes are, and may be a key to their underlying motivation. By further extension, Good People Have Good Sex, to some degree because they're usually well-endowed. Expect many authors to give us the exact dimensions of this uberpenis, conjuring the mental image of a PoV-character either breaking out a measuring tape at a romantically inappropriate moment or somehow possessing their own finely-calibrated genitals.

Unsurprisingly, most writers don't really think through the Real Life implications of a twelve-inch penis — for more detail, please refer to that page.

Super-Trope to Black Is Bigger in Bed, which is the erroneous assumption that black men are "gifted" with bigger penises than men of other ethnicities. When a large penis has comedic value instead of (or in addition to) sexual value, see Gag Penis. Contrast with Teeny Weenie, which is a penis which is smaller than the average, and often leads to mockery of the guy who has it because of this trope, and with Big Prick, Big Problems, when a large penis is shown to cause problems for its owner. The female equivalent to this trope is Buxom Is Better. Often related to IKEA Erotica and Raging Stiffie. When taken to extremes can become a case of Anatomically Impossible Sex, or alternately of Writers Cannot Do Math.