Bigfoot, Sasquatch, and Yeti
aka: Bigfoot 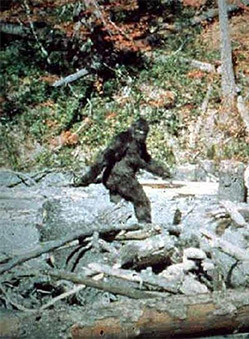 Tall hairy humanoids who maintain a furtive existence in various remote corners of the world. "Bigfoot" and "Sasquatch" are different names for essentially the same entity, whose (ahem) stomping grounds are mostly in the northwestern corner of the United States and the southwestern corner of Canada, with sightings also reported in the Sierra Nevada and Rocky Mountains. The "Yeti" or "Abominable Snowman" is a variety found high in the Himalayan Mountains, commonly depicted (whether due to associations with familiar Arctic animals like the polar bear, or just the "snowman" association) with white fur in fiction, although the local legends described it with red to brown hair.note Ironically, Bigfeet have been reported to have white fur, particularly in one sighting in Pennsylvania. Other lesser known varieties turn up in world-wide folklore and history under an assortment of names, such as the "woodwose" or "wild men" of Europe (though those guys share some traits with Fauns and Satyrs too), the "Yowies" of Australia, the Almas of Russia and Mongolia, the Yeren of China, the Hibagon of Japan, the "người rừng" of Southeast Asia, the Kakundak of Africa, or the "Skunk Ape" which dwells in the swamps of the southeastern United States.

Common characteristics are said to include an extreme shyness and lack of aggression towards humans (though reports and accounts of extraordinarily hostile encounters do exist), emitting horrible odours and unearthly noises, and of course scattering large footprints about as they frolic in out-of-focus areas. Most scientific authorities regard these creatures as either entirely imaginary or the fabrications of human pranksters, but like lake monsters and the Chupacabra and unlike explicitly legendary creatures such as the Wendigo or The Jersey Devil (and also unlike tongue-in-cheek folktales in the vein of fearsome critters and drop bears), BS&Y have devout believers in their existence. Often speculated to be akin to large, herbivorous hominids such as Gigantopithecus

See also Frazetta Man and Our Cryptids Are More Mysterious and its related tropes, for other alleged-to-exist creatures.