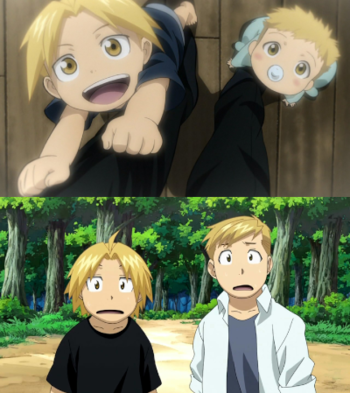 Of course, it is less unusual for younger brothers to be taller than older sisters, given that men are generally taller than women. If this is portrayed as strange or unusual when both siblings are fully-grown adults, this can be a case of Reality Is Unrealistic, similar to Teens Are Short. But this trope can still be played straight if he's a hulking giant while she's normal-sized.

Such height differences can also be the case with adopted siblings who have different biological parents and thus different sets of height genes. This can be heavily exaggerated in more fantastical works where Interspecies Adoption is practiced; for example, if the younger adopted sibling is a literal giant, a Kaiju, or other similar type of massive creature, or conversely, if the older adopted sibling is a dwarf, a fairy, or other similar type of diminutive creature. Shapeshifting can also cause or amplify this height difference, especially if the older sibling is made younger or the younger sibling is made older (or maybe some more general type of Sizeshifting). See Small Parent, Huge Child for a parent-child variation.