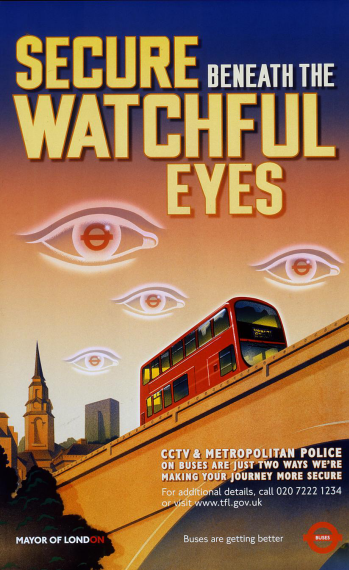 This is a real poster for a real public transportation system.
"Nothing was your own except the few cubic centimetres inside your skull."
— George Orwell, 1984
Advertisement:

Greetings, Tropers! This is your friend, Mister Wiki, speaking to you. We all know you love TV Tropes (although some could love it better—but do not fret! Our beloved Trope Police are eager to enlighten our dear friends on the proper social behavior expected. Changing negative attitudes is never easy, but we are understanding), and I have just implemented a way for TV Tropes to love you back. I call it the Pan-Optical Processing Terminal Interface/Controlling Oversight Network. This way, whenever you look at TV Tropes, TV Tropes can look at you. Doubleplusgood!

Now, Tropers, don't worry. We won't abuse this power. We'll just watch a few of the troublemakers. But nobody will know when we're watching, so we'll all have less to worry about. I know there are problems in the world, but they will all be sorted out by our trained teams of professional troubleshooters.

All those poor fools who might ignorantly object to our benevolent oversight will be taken to read Trope 101 and reeducated. Not that such people really exist, of course. Don't worry, Tropers, everything is fine. Everyone is happy. Everyone is safe.

Your likelihood of relating this trope to Adbot, who is also watching you, has been noted. The Eye of Providence is typically used as a shorthand for this type of surveillance.

Not to be confused with Big Brother Instinct, nor with Little Brother Is Watching, which focuses on the influence one person has over another. Neither with The Watcher, who can watch everything but just for the heck of it, without doing anything about it.

Yes, this is Truth in Television, but there is no need to go into specifics. Not only does surveillance exist in every country, but putting real life examples here is Too Controversial and perfect bait for a Flame War, which is quite repulsive, really. All we ask is that you go about your life, secure in the knowledge that, no matter where you are, We Are Watching. But this can also be interpreted to mean that there has to be a Big Brother in charge so as to take care of his little brothers.

Happiness Through Conformity.
Strength Through Editing.