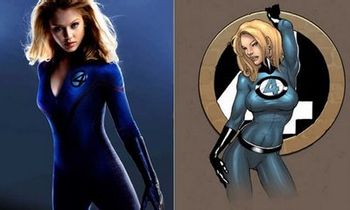 She seems to be missing something. And this is after poster enhancement got done with her.
Advertisement:

All our beloved favorite super-heroines have boobage by the truckload. The problem is, most actresses don't. Comic book proportions are relatively hard to find in Real Life (especially among the acting population), so more often than not, the folks behind the movies simply won't try to replicate the sizable endowments of their comic book counterparts, and will cast actors who are noticeably more commonly proportioned.

Of course, slim actresses with large breasts usually can't get work because the industry considers anything above a C to be "huge" and will only cast her as eye candy. And the majority of actresses who have G-cups and bigger tend to be Hollywood Pudgy.