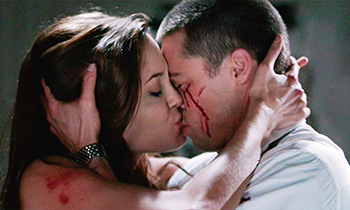 Would you believe that they were in a Would Hit a Girl Brutal Brawl just moments before this?
"A scar on the face is a badge of honor for a man. Though it's only a flaw on a woman."
— Momo Nishimiya, Jujutsu Kaisen
Advertisement:

Women and girls are action and adventure heroes — just like men and boys are! They get into dangerous situations, face menacing villains, get captured, and even get into fights. But where death-defying stunts leave men visibly bruised and bloody, the women are oddly put-together. When women tear their clothing, it's that kind of Clothing Damage; if their hair's unkempt it's artfully dishevelled. Cuts on the face are always perfectly placed to emphasize their cheekbones. Basically? Fierce hand-to-hand fights are cool, even sexy, but the broken noses and black eyes they cause are not. A heroine will almost never suffer a permanent injury such as the loss of a limb or eye, no matter how much punishment she goes through. Even when heroines die, they'll (usually) be privileged to suffer "beautiful" deaths (IRL, corpses occasionally shit themselves, and this is statistically more likely in women than in men).

In video games (especially fighting ones) in that girls and boys can fight and both genders can take the same hits it is not uncommon for girls to have less extreme facial reactions (IE. doesn't pop out tongue, eyes don't come out of head, or general deformation such as jaws stretching out when hit under said jaw) while males tend to vary on their consequences for taking hits even if they take the same amount of damage to the HP bar.

The other version of this trope concerns a different form of beauty: "inner" beauty — i.e., the recognition that women have bodily functions, due to being, you know, human. Gross-out jokes (and anything involving farts, burps, whatever) are male territory.

This trope is generally more prevalent (and noticeable) in visual media when you can actually see the women in question. Preserving female characters' attractiveness at all costs is most likely responsible for the prevalence of the Cute Monster Girl and its various related tropes. Male aliens, robots, and monsters can be as outlandish as the creator desires, but female aliens, robots, and monsters inevitably look just like regular attractive women with fangs, horns, antennae, or even just an unusual skin color. Expect the aforementioned female non-humans to be nowhere near as ugly as they're depicted as being.

This is also part of the reason that Men Are the Expendable Gender, and that female characters who do die generally get much "gentler" deaths or don't die onscreen. After all, you can't show a woman getting set on fire, riddled with bullets, or having her head ripped off by the monster without ruining her good looks, and nobody wants that. There is also a practical possibility for this in long-running works - characters who have particularly bad scars will get them on their back, chest or legs to save make-up artists the trouble of having to apply more prosthetics than they would if the scars were on the face.

It's more common in the West, particularly in older movies and shows — however in Japan, the outer beauty version is often averted, with people being roughed up or exposed to violence regardless of sex/gender; on the other hand, the inner beauty version is, if anything, much stronger. This may not protect female antagonists from Gunge, or, less commonly, female villains from the appropriate scarring.

Compare Dirt Forcefield, Kicking Ass in All Her Finery. Contrast Unkempt Beauty. For the clothing only, see Bullet-Proof Fashion Plate. A common specific form involves characters (especially women) who Does Not Like Shoes, whose feet are very rarely shown to be as dirty and/or calloused as those of people who habitually go barefoot outdoors are in real life.

If beauty is tarnished and then subsequently killed off, it's Death by Disfigurement. If she lives, it's almost always a ticket to the land of Body Horror, via Beauty to Beast. If intentionally done by themselves, it's Tarnishing Their Own Beauty. For a version of this that applies to beauty lost through time, see Men Get Old, Women Get Replaced. Good Thing You Can Heal can be used as a Double Subversion of this trope — beauty gets tarnished, and then quickly restored.

Examples of the first (action oriented) kind:
NO AVERSIONS

Examples and exceptions of the second (gross-out oriented) kind: