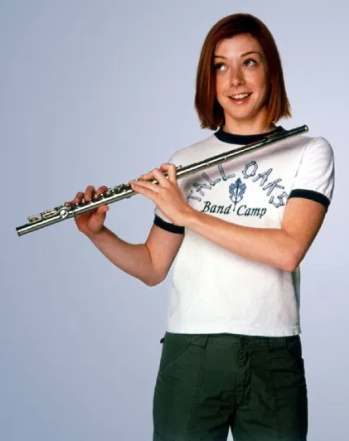 "This one time at band camp, I..."
"How could you have a soccer team if all were goalkeepers? How would it be an orchestra if all were French horns?"
— Desmond Tutu
Advertisement:

A staple in many American high schools, the Band Geek is an ubiquitous sight in the band room; they are usually seen traipsing down the hall with their instrument case, or jamming out in a practice room during study hall. They're never the cool kids, and are generally outcasts or nerds. Note that this contrasts hugely from the kids in a band who are generally cool rebels. The kids in the band are usually straight laced geeks. This is why that, though Girls Like Musicians, the band geeks are usually left out.

The Band Geek is not just about band; it can include orchestra kids too. (For those of you who don´t know the difference, band is usually the crowd with wind-related or percussion instruments, and orchestra is string instruments, like violin, cello, etc.)

Can be the result of parental pressure, which frequently overlaps with Asian and Nerdy. The Asian Band Geek usually plays a stringed instrument like piano or violin. A particularly talented Band Geek may be a Child Prodigy or Teen Genius. Most Band Geeks, however, do it just for fun. Compare Polka Dork, another character whose musical inclinations are shorthand for social awkwardness. See Music Tropes for more information pertaining to Band Geeks.