Back for the Finale 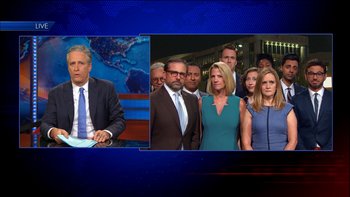 When a character from a serial work who hasn't appeared for some time returns for the Grand Finale.

Writers want to end on a high note, and to really make that Grand Finale impactful, it helps to make it encapsulate all the best parts of their work. So it's only natural that the finales bring back all types of character, minor or major, for the sake of a rewarding viewers for keeping up with the continuity, paying off a joke set up long ago, or show what those characters have done with their lives.

In more dramatic works, this can often overlap with Back for the Dead, since if it's the last time we're ever going to see these characters, the writer has no reason to keep them alive, so Metafictional Thermodynamics tell us the writer will surely kill them.

Often a Sub-Trope of The Bus Came Back, where a character returns to the show after there was a reason given for their absence.

Not to be confused with Last Episode, New Character, where character appears for the first time in the finale. When everybody comes back, it's a Continuity Cavalcade. Can overlap with Chekhov's Gunman, if the returning character previously had a very minor role in the plot but ends up playing a large part in the climax of the story, or Climactic Battle Resurrection, if they not only return to the story, but also return to life.

Alternative Title(s): Hey Its You, Hey I Know You