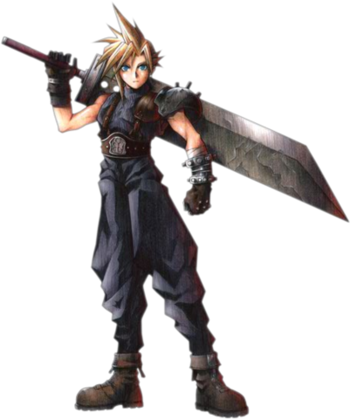 That sword doesn't slow Cloud down one bit…
He can even carry it with one hand!
"Massive, thick, heavy, and far too rough. It's too big to be called a sword. More like a heap of raw iron."
— Narration introducing the Dragonslayer, Berserk

The Rival or a villain will sometimes own a BFS, representing a significant hurdle and challenge for the protagonist to overcome. It is rarer for a secondary character, such as The Lancer or The Big Guy, to own a BFS, but if the lead character does not possess one, one of the others in their party likely will.

Compare Big, Bulky Bomb, BFG (as mentioned above) and Great Bow. May well be a Bigger Stick. May involve Hammerspace physics for storage, or some sort of strange magnetism. Almost always held casually resting on the hero's shoulder. If it's being wielded with just one hand, it's a One-Handed Zweihänder. Compare Dual Wielding, Heroes Prefer Swords, and Infinity +1 Sword. May be used to create a Sinister Scraping Sound. Obligatory links to Freud Was Right and Compensating for Something are here for your convenience.