Attention Deficit... Ooh, Shiny!
aka: Distracted By The Shiny 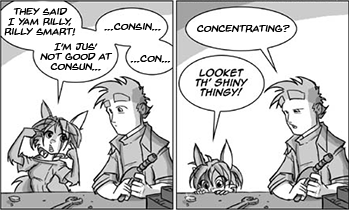 Hello, Tropers. Welcome to the page of multiple interruptions for picking up stuff off the — Ooh, a page telling us to describe this trope here!

In media, the symptoms of attention deficit disorders tend to be exaggerated to the point of absurdity. Sufferers seem to be on a constant caffeine high. They are unable to maintain focus on anything for more than a few minutes before getting distracted by a shiny object, hence the trope title.

In reality, ADHD (Attention Deficit Hyperactivity Disorder) consists of a whole set of symptoms, some detrimental and some beneficial. For example, one person with ADHD might be very social and loves talking to different people, gets excited about discovering new things, and sometimes loses track of what's happening around them; and another might be reclusive and shy and unable to perform well in a controlled setting, but really opens up with a close friend or when talking about something that interests them (for more information on ADHD in real life, see our useful notes page).

There are a few simple reasons for this trope. First is a rampant misunderstanding about what ADHD actually is (in which case you should go do some research

), resulting in the oversimplification and exaggeration.note  The misdiagnosis of ADHD/ADD, especially with the rampant Ritalin craze in the '80s, have really shaped public opinion towards this disorder. Bear in mind, though, there are people who suffer from this out there. Second, it's much funnier to have a character who just fidgets and spaces out occasionally without having to worry about the realism of adding other dimensions to their personality.

If this type of character has Animal Motifs, they're often associated with dogs, squirrels, kittens, or ferrets.

See also Hollywood Psych, Hollywood Autism, The Schizophrenia Conspiracy, and "L" Is for "Dyslexia". Similar types include the Absent-Minded Professor, Forgetful Jones, and the Cloudcuckoolander (who may or may not have a disorder). This exaggeration is frequently seen in Genki Girls and Keets. Can often overlap with Easily Impressed where people are amazed easily rather than distracted. These symptoms are well within the very wide range of symptoms that you might see in any character with an Ambiguous Disorder. Attention Deficit Creator Disorder may be what you get when an artistically inclined individual has a case of this in Real Life.

Closely related is What Does This Button Do?, which you can expect to hear often from such individuals. Hilarity may or may not ensue. Liable to Forget To Eat, right up until the point that a Delicious Distrac- HEY! Are those chocolate chip cookies?! Mmmm....

Not to Be Confused with— oh, wow! Look at all the examples!

Rebound gets distracted by a ball while trying to be focused.

Rebound gets distracted by a ball while trying to be focused.