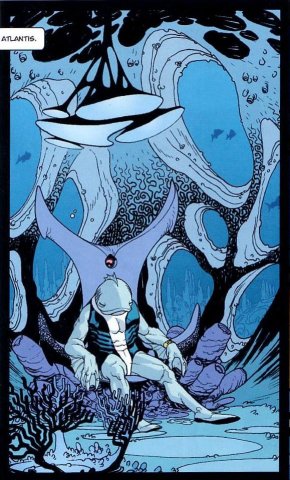 Another exciting day under the sea. Wheeee.
"THE MANY SUICIDES OF AQUAMAN: The Loneliness Of The Underwater Crimefighter When There's No Crime Underwater"
— Warren Ellis
Advertisement:

Due to the long history of Atlantis, merpeople, sea monsters and other myths about the ocean, people are fascinated by the mystique of the sea. Most Speculative Fiction stories, particularly in the fantasy vein, may well try to explore or add to the setting by introducing the presence of some sentient underwater species inspired by merpeople. Futuristic science-fiction oriented series will have humans colonize the ocean floor in undersea domes - or perhaps people have discovered that cetaceans are actually sentient and have been in hiding all along. In the horror genre, there may be an Eldritch Abomination and its spawn waiting at the bottom of the ocean. An alien race or precursor artifacts might be down there somewhere, too. Plus, the ocean has pirates.

You'd think that all of this might make for a really cool setting for stories.

The ocean is boring to humans. All of the conventions of human society are missing from the ocean. Even with the addition of colonies to the seafloor, you can't really write a story down there as easily as you could on land. There are probably no ocean theme parks, no underwater romantic restaurants, no ability for the cast to move around. Also, like it or not, the basis for about 80% of fantasy, science fiction, drama, and adventure stories is They Fight Crime!. But there's hardly going to be any crime to fight — there are no underwater bank robberies.

Also, everything underwater is typically depicted in various shades of blue. This will get depressing and boring alike after a while. The fact that things tend to move more slowly underwater doesn't help, either.

As Larry Niven once said, humans mostly only use or think about the top of an ocean. From the perspective of most humans, the ocean has only one environment: water. There are no forests to get lost in, deserts to be stranded in, mountains to scale, swamps crawling with disease, or cities to have adventures in. It's just water and fish. This is a vast oversimplification of the incredible diversity in underwater ecosystems and biomes to the point of outright falsehood — any oceanographer would tell you there are forests, mountains, barren wastelands, briny mires, plenty of places to put Atlantis, and much more — but it's the popular perception.

As a result, settings that have a rich undersea world will inevitably ignore it. Writers just can't figure out what to do with it. It will be pushed into the background, forgotten about, or openly mocked. Tabletop game expansions that take place underwater are just going to produce a heck of a lot of unused character templates - because creating an underwater setting or making a character that has to have saltwater poured over their gills regularly is hard. Besides, it's rather hard for a being without lungs to survive out of the water, so their utility outside their intended setting is limited. And living your life in a futuristic sterilized bubble colony at the bottom of the sea where there are no intergalactic battles or intrigue would just be plain boring when you could set a story on a space station!

Speaking of which: Space settings share something of the same problem, with the side-benefit that space, given FTL travel, is a route to other planets where humans might find useful environments. Humans, like other animal species, have an environmental niche which we require to exist. A race of undersea sapients would likely find land stories boring, because they can't experience land directly, just as humans can't experience undersea (or space) directly. Any being has a limited range of environments it can ever directly experience. See Sci-Fi Writers Have No Sense of Scale, All Planets Are Earth-Like, Single-Biome Planet, Rubber-Forehead Aliens, and Planet of Hats.

For related underwater tropes, see: Water Is Air, This Looks Like a Job for Aquaman, Flying Seafood Special, Under the Sea, Token Aquatic Race.