As Long as It Sounds Foreign
aka: Foreign Sounding Gibberish 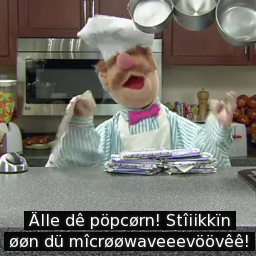 You can't say the Swedish Chef

doesn't have a way with words. Or letters. Or diacritics.
Sol Dibbler: I don't think "bwanas" is the right word, Uncle.
CMOT Dibbler: It's Klatchian, isn't it?
Sol Dibbler: Well technically, but I think it's the wrong part of Klatch and maybe "effendies" or something...
CMOT Dibbler: Just so long as it's foreign.
— Moving Pictures
Advertisement:

Many shows and movies don't bother getting a foreign language right when they portray them. The incidence of this increases along with the obscurity of the language.

It is easily explained away as native speakers are hard to get, especially if the country of origin is on the other side of the globe and the language is fairly obscure. Even if you finally get one, he might not be so helpful if he has a poor knowledge about the aspects of his own language that the work specifically needs to use. Or simply he's a poor actor or a poor choice for the role (while non-native actors won't be able to correctly pronounce phrases in a language they don't speak). And that's assuming there even still are any native speakers.

But first and foremost, if the intended audience won't be able to tell the difference anyway, why bother? A somewhat more redeeming justification is that the show isn't supposed or expected to accurately portray a real-life language.

A variation on this is that the foreigners speak English, but are identified as foreign by an accent or are parading universally known national images.

Names appear especially hard to get right, even European ones, which is all the stranger as most American naming conventions haven't ventured far from their origin. This is why we see female Russians with masculine surnames and patronymics used as names or surnames, or why most French characters in comedic works tend to have a name composed of an English word preceded by a random "Le" or "La". This could be explained if their name was anglicized, though the practice has fallen out of favor in recent decades.

Amusingly: when this trope is applied to a character's name, it often results in a Dub Name Change when a work is exported to the country where said character is supposed to be from—since the original name would sound ridiculous to audiences in that country who actually know the culture. For example: in the Japanese dub of Star Trek, Hikaru Sulu's name is "Hikaru Kato"; and in most Japanese translations of Teenage Mutant Ninja Turtles works, Hamato Yoshi and Oroku Saki are renamed "Yoshihama Takeshi" and "Oroku Sawaki".

This tends to be even more common in Eastern works, where writers usually tend to have even less experience with other cultures, leading to results that would seem more at home in Middle-Earth than any existing place on Earth.

Contrast with Gratuitous Foreign Language (and all its subtropes), where the writers take care to give characters lines in a foreign language — which are often poorly rendered by the actors. Contrast also with Poirot Speak, where everyone in the native country has an elementary education in their native language but can only say the hard words in heavily accented English.

Contrast also with Famous-Named Foreigner, when in an attempt to avert this trope, the author manages to give his foreign character a real name... albeit belonging to a famous historical character, which often leads to ridiculous results. When a work is named with this trope, it may result in a Word Purée Title.

For hilariously inverted examples of this trope, watch here

CAUTION: This trope may lead to stumped subtitlers.

Alternative Title(s): Foreign Sounding Gibberish, Its All Greek To Me