Artistic License  Ornithology
aka: Somewhere An Ornithologist Is Crying 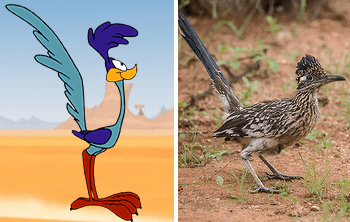 Also, real roadrunners don't make beeping noises.
"Only after Philosopher's Stone had been accepted for publication did I realize that Snowy Owls are diurnal. I think it was during the writing of Chamber of Secrets that I discovered that Snowy Owls are also virtually silent, the females being even quieter than the males. So all of Hedwig's night-time jaunts and her many reproving hoots may be taken as signs of her great magical ability or my pitiful lack of research, whichever you prefer."
— J. K. Rowling being refreshingly honest
Advertisement:

Cartoon birds in starring roles tend to be the more recognizable species; anseriforms (ducks), galliforms (chickens and turkeys), strigiforms (owls), and sphenisciforms (penguins) are particularly popular and will all look pretty generic. In some cases, you will have to take the writer's word for it what species they are meant to be. Parrots (psittaciforms) are also popular and they'll sport generic chicken-like bird feet and will either be pure green with huge yellow beaks, or have cockatoo crests and a bizarre mix of rainbow colors. Diurnal raptors (falconiforms) tend to look like an odd combination of any carnivorous bird; in particular cartoonists seem to get hawks and vultures confused with each other (and sometimes corvids, which are passeriforms, are tossed into the mix too). And there's this one especially overused cliche where virtually every bird of prey, like eagles, falcons, vultures or even owls will be portrayed with the distinctive screech of the red-tailed hawk: most infamously the bald eagle, whose real cries are far less fearsome-sounding.

Almost all generic small cartoon birds will behave like robins, hopping around on the lawn and eating worms. And they will appear as a Palette Swapped sparrow, often bright yellow or blue, with a yellow beak and legs. While this is the case for some passerines (like the common yellowthroat or the chickadee), for others it's not the case.

A major subtrope is the idea that all birds are chickens. Even today, when your average person is unlikely to see live chickens on a regular basis, all birds seem to act like domestic fowl. They make neat nests out of straw. They spend most of the day there and all of their time sleeping there. They lay loads and loads of oval, white eggs, and these contain babies who will emerge fluffy, yellow, adorable, and constantly chirping to their mom. Mom will then immediately lead them out of the nest to hunt for worms, of course. If the show takes things far enough, the birds will hang out in a large, somewhat organized group made up mostly of females and chicks who are led by one dominant male.

Barring the possibility that it really is the hardest thing in the world to crack open a Peterson Field Guide, there may be a reason for the chicken thing. This is largely a problem of Western Animation, and Disney's shadow is extremely long. Most of his characters were domestic mammals; hence the popularity of chickens as a model for all of our flight-capable theropod friends. Furthermore, many books on animal drawing will focus almost entirely on mammal anatomy — and you might get a tiny section on the chicken to cover birds.

This may or may not have to do with the fact that birds are far less diverse morphologically than mammals (despite having almost twice as many species). Thus the phrase "birds (them) and beasts (everyone else)".

Can certainly extend to other flying creatures; many are the pterosaurs and other Giant Flyers that are shown constructing chicken-like nests. See also Feather Fingers, Noisy Nature, Toothy Bird, Ostrich Head Hiding, Acrophobic Bird, Flying Flightless Bird, Penguins Are Ducks, Mouthy Bird, No Cartoon Fish and All Animals Are Dogs.