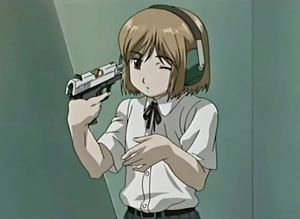 Well, she's practicing good trigger discipline, at least...note  Seriously, though: check it with a cleaning rod.
"Kojak": Hey, Meathead, tell us what's written on the barrel of your gun.
"Starsky": It says, hu, "Hold by the other end."
— The Benny Hill Show, "Murder on the Oregon Express"
Advertisement:

Guns are dangerous things; they're designed with the primary purpose of using a projectile to injure or kill whatever it's fired at. Such power needs to be respected, and it shouldn't be surprising that there are various obvious safety rules in place when using a gun, that anybody who wants to use a firearm should know. Even then an expert can conceivably make a serious (and possibly fatal) mistake when handling a gun. There is even a saying among gunsmiths that "There are two types of gun owners. Those who have had their guns discharge accidentally, and those who will have their guns discharge accidentally."

Many writers, actors, artists, and directors, however, ignore these rules. What results from this are scenes where characters are doing things they shouldn't, such as placing their fingers on the triggers of their weapons when not about to fire, or pointing their weapons at people whom they are not trying to shoot; one particularly common example is foolish officers making routine arrests (e.g. drunk driving or check fraud) at gunpoint for no real reason. This is particularly troublesome when these people are supposed to be experts with lots of experience with their weapons.

The distinction between this trope and Reckless Gun Usage is that this involves people who either should know gun safety based on their profession, or are stated to have extensive experience with firearms while Reckless Gun Usage involves people who are likely not familiar with basic firearm safety. If this is done for comedic purposes it's Juggling Loaded Guns. If this shows up and somebody gets shot, it's I Just Shot Marvin in the Face. If the rules are followed and somebody gets shot anyway, that's Reliably Unreliable Guns going off. Firing in the Air a Lot is always a case of this, as are Pants-Positive Safety and Gun Twirling.

May also be the writer hinting that a character isn't as professional as he should be.

See Guns Do Not Work That Way, for links to Tropes of the most common offenders.

Note that there is a very good reason why all of the examples here are listed under Artistic License, as trying to actually replicate any of them could lead — and has led — to accidents, many of them fatal. For obvious reasons, Don't Try This at Home.

The Four Rules of gun safety: