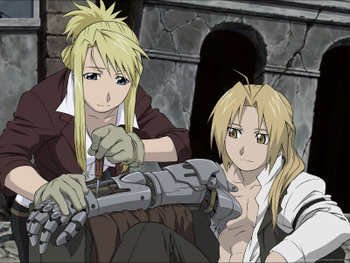 Sometimes you need a helping hand. One that's made of metal. And awesome.
"A chainsaw can remove a limb,
or act as a replacement."
— Showbread, "Dead By Dawn"
Advertisement:

If you're in an era where cybernetics are not just in the future but ridiculously so, never fear: the Rule of Cool allows you to get Steampunk limbs instead. Nevermind that this makes little sense in terms of nerve connections and power source. A fantasy world may substitute magical prosthetic limbs (based on the magic that produces the Golem), but this is rare since such worlds can usually use the same magic to regenerate lost limbs instead.