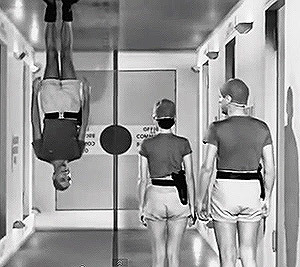 Virtually all Sci-Fi space ships have some form of artificial gravity. The technology behind this is never quite explained.

In Space Opera, artificial gravity is the last thing that breaks when a ship is damaged. You might have lost shields, weapons, drive systems, and half the hull, but things will still fall when dropped. This makes a certain degree of sense, as fixing a ship while floating around helplessly would probably take much longer. It also makes sense energetically, as there is no (1st Law) reason for an artificial gravity system to consume a significant amount of energy. Artificial gravity is also essential for long-term flights, for if you spend too long in Zero G, then your muscles will become a painful, squishy mush once you get back to regular gravity.

One major reason for this in live action is that the only reasonable way to simulate zero gravity without leaving Earth entirely involves something called parabolic flying in cargo aircraft (such as NASA's "Vomit Comet"), which costs a lot of money, only gives you about thirty seconds of zero G at a time, and isn't the world's best thing to build a set in (although that's exactly what they did for the film Apollo 13 and the series Space Odyssey Voyage To The Planets). Of course, there are cheaper ways to simulate it using Wire Fu and camera tricks — but all in all it's a hell of a lot easier to simply Hand Wave the whole issue away.

Also, once you have the knack of making gravity, switching it off shouldn't be that much of a problem, right? Cue the anti-gravity hovercraft. You might also use it for Inertial Dampening, to make a Reactionless Drive, or make it so We Will All Fly in the Future.

Related to Gravity Sucks. No Gravity for You is what happens when characters get smart about the Fridge Logic of this trope. When it's a superpower, you get a Gravity Master.

Hard Sci-fi tends to avoid the idea that artificial gravity can be generated out of nothing. Typically, the only artificial "gravity" you encounter in Hard Sci-fi is either the result of spinning the ship or habitat, or the entire ship accelerating at one G. Either that, or everyone just floats around inside their spaceships.

Many times a show set in space will brush off the gravity issue with "magnetic shoes". This bit of Artistic License – Physics will magically affect everything a person is wearing and everything in the room, while in reality wearing shoes with magnets in them would only anchor your feet to metal floors — not your arms, hair, the coffee in your mug...

See Centrifugal Gravity if the ship generates gravity by rotating.