Aroused by Their Voice
aka: Audio Erotica 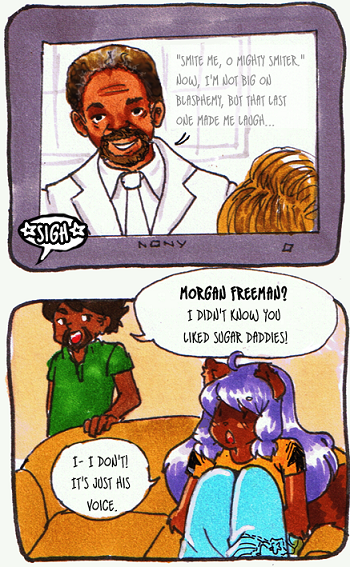 "God, even her voice is total audio-sex."
— Julia Evans (on her Really Gets Around friend), Mindstar Rising
Advertisement:

Voices that are considered sexy In-Universe. For women, husky ones are popular; breathy, low Marilyn Monroe-esque voices are iconic. For men, deep baritones with sonorous intonations often are used. Bassos are rarer but can also fit the bill. A popular variation is the "Siren Switch," where the speaker isn't nearly as sexy as their voice.

of Tsutsuji's husband's affair, Katsura become infatuated by Yuri's voice from a recording of her, Karin, and Akane's conversation and asks her out after the affair is settled. More specifically, it wasn't just Yuri's voice but her snapping and verbally tearing Akane to shreds after the affair was discovered and Akane tried to blame her and Karin for not trying harder to stop her that made him fall for her.
Webcomics
Web Original
Western Animation
Feedback

Simon gets seduced by a woman without even knowing what she looks like until it's too late.

Simon gets seduced by a woman without even knowing what she looks like until it's too late.