Anvilicious
aka: Anvil Of The Story 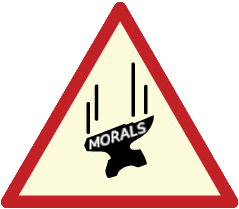 A portmanteau of anvil and delicious (or for those who are more etymologically inclined, a combination of "anvil" and "licious," which is ultimately derived from Latin meaning "luring," so it could be interpreted as anvil-luring; "delicious" by the way is ultimately from the Latin meaning "luring from"), anvilicious describes a writer's and/or director's use of an artistic element, be it line of dialogue, visual motif or plot point, to so unsubtly convey a particular message that they may as well etch it onto an anvil and drop it on your head. The term anvilicious thus qualifies as Sesquipedalian Loquaciousness.

Frequently, the element becomes anvilicious through unnecessary repetition, but true masters can achieve anviliciousness with a single stroke. The easiest way to be anvilicious is through simple cause-and-effect; someone will do something the writers consider "bad" and then something bad happens as a direct result. If the writers prefer not to show the direct consequences of whatever they're crusading for or against, a common alternative is to have a character presented as completely "centred", "unbiased", and "grounded" testify. Surely if this character agrees with something, it must be the right thing to do.

Which leads us to the deep question: Should authors try to make their Aesops subtle? Or do anvilicious Aesops actually have a good side, i.e. the fact that people immediately see what the author is trying to do with them? There used to be a trope, since folded into this one, "Some anvils need to be dropped," suggesting that some, at least, are good uses. Just because they "needed" to be dropped didn't make them not Anvilious, thus that trope was folded into this one.

Compare and contrast Propaganda Piece. See also Script Wank, Can't Get Away with Nuthin', Scare 'Em Straight, Obviously Evil, And That's Terrible, and more than a few Clueless Aesops. Black-and-White Morality often results in these kinds of Aesops. Contrast Accidental Aesop for when a work without an intended Aesop/anvil is seen giving a valid lesson, and Alternate Aesop Interpretation for when audiences see a different lesson than the intended Aesop/anvil.

Always remember that Tropes Are Tools. Not to be confused with the literal Anvil on Head.