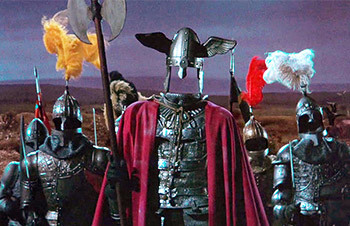 No flesh wounds to worry about with these guys.
"We were different once. We fought, drank, and loved, as mortal beings. But our world changed and we faced a stark choice: alter our bodies, or perish. Yet 'survival' is not the same as 'life'. Now we are prisoners of the armor that binds us and the Dust that sustains us."
— The Broken Lords

A character is attacked by a heavily armored knight. Upon defeat, however, it is revealed that there is nothing inside. The empty armor falls to the ground with a great clatter. Was it a ghost? Enchantment? Animation by something unseen?

This trope usually involves some type of full armor that is made up of rigid parts and more or less keeps its humanoid shape when not being worn, such as a medieval full plate or samurai lamellar armor. Because mail armornote You can also call it "chain mail", but that's not what they called it in-period and it's technically redundant. The etymology of "mail" goes back to the Latin word for "mesh" or "net", and it was originally used only to describe armor made of interlocking iron rings. In the 19th century some carelessness combined with technical misunderstandings led to the word "mail" being used to mean any kind of armor, hence the need to differentiate "chain mail" from "scale mail" or "plate mail"; the latter are properly called "scale armor" and "plate armor", while the former can simply be called "mail".takes the shape of its wearer and is formless on its own, you will not usually see a mail shirt and leggings walking about because it runs the risk of looking silly. On the other hand, many kinds of armor are made of some combination of textile, scales, mail, or plates and there is nothing saying you can't have an animated armor with both flexible and rigid components.

In Science Fiction settings, a similar effect may be achieved by using Powered Armor in unmanned mode (programmed or remote).