And Call Him "George"!
aka: Love Em To Death 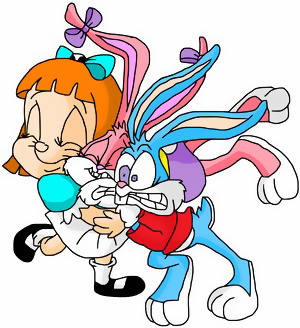 Aww, isn't this little guy cute? I'm gonna take him home and hug him and kiss him and squeeze him with all my heart and be such a great friend and...

...and for some reason he fell asleep. You OK, little guy?

Named after the character Lennie Small, in John Steinbeck's Of Mice & Men, this is a subtrope of Does Not Know His Own Strength, in which a large monster just wants to express their love (typically by hugging) for something much smaller than them — without being aware of how much their love is harming it. Usually played for laughs, although there are exceptions. Possibly a deconstruction/satire of the Gentle Giant.

If the monster is a human, this may be the way they tame Fluffy. If not, it is a type of Non-Malicious Monster.

This trope, like Fluffy the Terrible, Grotesque Cute, Enfante Terrible, Killer Rabbit, and Psychopathic Manchild, plays off the conflict between "cute" and "terrifying."

Compare Black Comedy Animal Cruelty, where intentional animal abuse is Played for Laughs. If inflicting pain by hugging is intentional, that is a Killer Bear Hug.

Sadly, this is a bit of Truth in Television, as children often kill small animals by accident in Real Life. This Trope is not to be be confused with naming conventions of Sleeping Car Porters.

In this introduction cutscene for "Calling All Mixels", Chomly learns the hard way that the Spikels' affectionate nature doesn't mix well with their sharp appendages.

In this introduction cutscene for "Calling All Mixels", Chomly learns the hard way that the Spikels' affectionate nature doesn't mix well with their sharp appendages.