An Axe to Grind 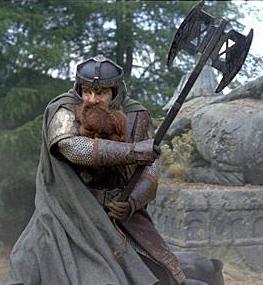 This is why nobody tosses a dwarf!
He had a broad axe, a mighty weapon, keen-edged and sharp, with which he had sent many a man to dine in Valhalla.
—The Saga of the Sworn Brothers
Advertisement:

While they appear very rarely, in works outside of fantasy, a hatchet, tomahawk or small hand axe (especially if dual wielded) usually implies that the user is either an experienced survivalist or special forces, and likely also wants to be left alone and should be. This is because of the hand axe's modesty and practicality. It is a weapon and a tool, and can be used for chopping both wood and necks. Hand axes can have extremely good weight distribution as well, which allows them to be used in very fast, acrobatic fighting styles.

These big lugs spin around their axes and throw them at a distance. Dont ask how they can teleport.

These big lugs spin around their axes and throw them at a distance. Dont ask how they can teleport.