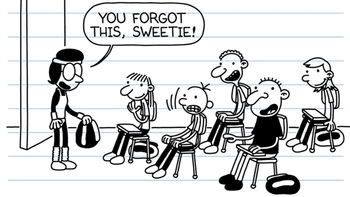 She's in her workout clothes, by the way.
"Your most important responsibility, as the parent of an adolescent, is to be a hideous embarrassment to your child. Fortunately, most of us parents have a natural flair for this."
— Dave Barry
Advertisement:

Children on TV live in terror of their parents ever getting a chance to interact with the other kids in school. This is for a very good reason — parents on TV seem to be on a quest to humiliate their children in front of their peers.

They always have a thousand-and-one stories about things their unfortunate offspring did when they were two years old, and they're always a thousand-and-one percent certain that everyone wants to hear them. And in that respect, they're absolutely right, just not for the reasons that they think — the Alpha Bitch and her ilk are just dying to hear humiliating childhood stories because they'll be able to tease the poor protagonist about them for years to come. Sometimes, childhood stories aren't even necessary: the parents' mere behavior, presence, or lifestyle are all it takes to turn a casual scene into something terribly awkward. Especially if the parents are bent on proving how "hip" and "cool" they are. Older offspring whose parents are deeply embarrassing when their good friends are around just have to remember that Friends Are Chosen, Family Aren't. If they're a teacher, they'll become an Embarrassing Relative Teacher, making things even worse.

If the hero lets slip that they don't like their parent's behavior, then the parents tend to be hurt. Due to the Rule of Drama (or, Informed Wrongness, more accurately), the situation will be contrived for maximum hurt and the hero is likely to have to spend the rest of the episode trying to make amends, with the whole thing ending on An Aesop with the hero learning to value the parents that embarrass him or her in front of other people and the parents gaining empathy for their child. Also, baby photos, middle names, and the Homemade Sweater from Hell are a must. Parental Sexuality Squick is related but doesn't require the kid's peers to be present.

Though sometimes it may not even be funny. A parent who is genuinely screwed-up, malicious or abusive can go beyond 'embarrassing' and into 'humiliating' territory.

Truth in Television, of course. You may actually have parents like this or even be one. Anyone with an Easily Embarrassed Youngster for a kid will usually be seen as this by their kid at least once.

When Doug, Delilah, Dolly and Spike are at risk of drowning, Doug uses this time to share some humiliating puppy stories about Dolly.

When Doug, Delilah, Dolly and Spike are at risk of drowning, Doug uses this time to share some humiliating puppy stories about Dolly.