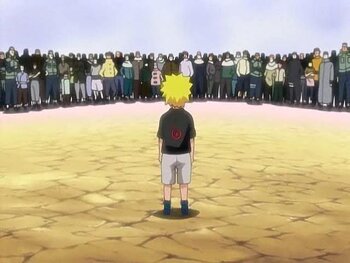 "Hey, it's that kid."
"Eww. Let's get out of here."
"All of the other reindeer
Used to laugh and call him names
They never let poor Rudolph
Join in any reindeer games!"
— Rudolph the Red-Nosed Reindeer
Advertisement:

A character is surrounded by people who constantly put them down, usually because of some trait that is integral to them being a hero or villain. It seems the only responses they can make to this are the extremes: "Guess I'll put up with it silently" or "Guess you don't need me." Or, worse yet, taking the Irrational Hatred to heart and starting to hate themselves. All the other Muggles will look down on the hero even as they're being slaughtered.

Not to be confused with Olive, the Other Reindeer. Nor with Dream-Crushing Handicap. Nor the trope about actual reindeer.