All Just a Dream
aka: It Was All A Dream 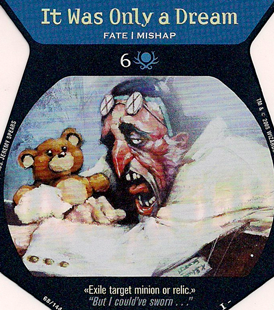 Normally, this really grates on the audience, as in general it tends to completely undermine the story that's just been told; if none of it was real, then what was the point? As such, it tends to work best when done humorously (the more silly something is, the easier it can be to accept that it doesn't really matter), and if it was just one episode of a larger whole, it can undo damage done by having a Writer on Board. An especially useful device in horror movies, where it can be used to subject the characters (and audience) to all manner of fit-inducing terrors without really affecting the narrative. However, if it's done badly, expect some audience members to be seriously annoyed, as it might feel like a Deus ex Machina (or worse, lead to Opening a Can of Clones). Even if it's done well, it may require a lot of Willing Suspension of Disbelief.

Variant form of the Reset Button. See also Crashing Dreams, Or Was It a Dream?, Fantasy Keepsake, Dream Intro, Dream Reality Check, Dying Dream, Catapult Nightmare, and Adventures in Comaland. Compare with Nested Story Reveal, a similar trope that lacks the dream aspect. Often deconstructed with the Dream Apocalypse. If the dream is a quick-hit gag instead of a major element of the narrative, you have a Daydream Surprise. When the trope is inverted, it may turn out That Was Not a Dream. If the dream was a nightmare, this could be a Shock-and-Switch Ending. When a character insists this trope is in effect as a defense mechanism, they're In the Dreaming Stage of Grief. Contrast with Dream Episode, which doesn't hide the fact that the plot is indeed a dream. Not to be confused with Cuckoo Nest.

If someone points out the contrast between dreams that frame a story and the much more chaotic dreams that people actually have, that's Real Dreams are Weirder.