All Guitars Are Stratocasters 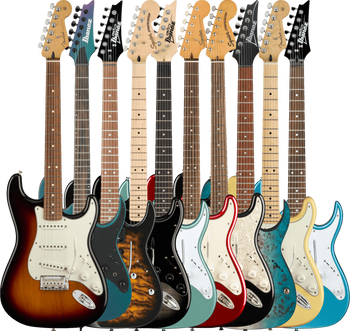 The "Strat", the only guitar ever made.
"Yeah, I don't even know what this thing is called."
— Gabe, Penny Arcade (It's not even a guitar; it's a bass.)
Advertisement:

When a author/artist/filmmaker/game designer/etc. tries to create a work featuring musical instruments and they are not an experienced musician themselves, they will usually lack the knowledge necessary to correctly depict that instrument or how that instrument functions. Electric guitars are the biggest offender here, because of their popularity, association with popular media, and the amount of hardware that is used to make and play an electric guitar.

This trope is much more likely to come into play if music is not the focus of the story, but a character is merely given a guitar to look cool. See The Power of Rock, Instrument of Murder, and Musical Assassin where this can also become a problem because the guitar is more of a weapon than an instrument. It is also more likely to occur in purely visual works because instruments have an incredible amount of detail that most artists simply won't want to render when the focus should be on the person holding the instrument anyway.

Generally speaking, when an electric guitar appears in fiction, it takes the shape of either a Fender Stratocaster or a Gibson Les Paul, two of the most iconic electric guitars. The Fender Stratocaster has two edges which taper into horned points around the neck, and typically has three single-coil pickups, a five-position blade, and three knobs (one for volume, one for tone for the middle pickup, and one for tone on the neck pickup). The headstock of a Stratocaster has all of the tuners on the same side. The Gibson Les Paul has a round shape with one edge that tapers into a horn, three-way toggle-switch, two double 'humbucker' pickups, and four knobs. The headstock has three strings tied to tuners on one side, and three on the other. If the guitar depicted is neither of these, it is probably a Gibson Flying V,

which looks like a sideways V, or a B.C. Rich Warlock,

which looks vaguely like a pointier Flying V despite being closer to an X shape.

This can also be brought about when music produced by an instrument is overdubbed onto an actor (or animation) using an instrument that should produce a different sound. Another possibility is depicting a musician in a historical piece as using a different type of instrument than the one he was famous for using. (Though this may occasionally be justified, as many guitarists have used more than one type of electric guitar.)

This may be justified in some respects; the Stratocaster and Les Paul are extremely famous guitars, and have both had many imitators and outright copies made, to the point where listing them all would take up too much space. In this case, a guitar that looks like a Stratocaster or Les Paul but with a Bland-Name Product label could pass without becoming this trope.

The electric bass equivalent would probably be All Basses are Precisions (well, there's no such trope, but...).

Just to note, this applies for all problems with musical instruments, not just electric guitars.