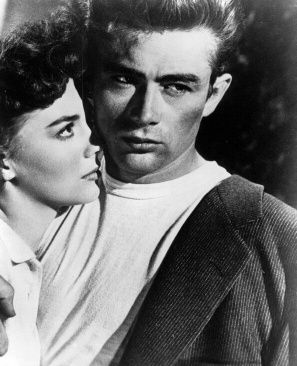 Be my bad boy. Be my man.
Be my weekend lover, but don't be my friend.
"Why do girls always prefer the distant, aloof, handsome, dangerous dudes instead of cheerful chaps like me?"
— Roger Ebert, Twilight review

All this, of course, tends to gloss over the fact that bad boys are, well, bad, meaning self-centered, possibly not too mentally stable, potentially abusive, might have trouble finding and keeping a legal job, and will most likely be more interested in the physical (read: sexual) aspects of a relationship than anything else. He's probably not going to be all that concerned with fidelity, either. So what if he can't be trusted? It's an honor for girls in media to be chosen by him, to walk into prom night with him on her arm, to ride on the back of his motorcycle with her arms around his waist, to stick her tongue out at the Alpha Bitch from the passenger's seat of his stolen convertible.

This portrayal can sometimes be the product of Entitled to Have You, Standard Hero Reward or Nice Guys Finish Last on the part of a good guy we're supposed to root for or the audience or the author. This bad boy is made to be a foil and show how "undesirable" the other options are. This can backfire if there are female audience members who have something else in mind. Ironically, their Fix Fic is likely to 1) make the bad boy look better and 2) make the nice guy look worse.

See Single Woman Seeks Good Man for a typical inversion. Also see More Experienced Chases the Innocent, which frequently overlaps with the much more sexually promiscuous bad boy pursuing an inexperienced "good girl". A popular subversion is to make the guy look like a bad guy but reveal himself as a Jerk with a Heart of Gold with little to no criminal record.

Related to I Can Change My Beloved, which often follows after this, and Power Dynamics Kink. The fandom reaction version of this is Draco in Leather Pants. In high school settings, often found alongside All Guys Want Cheerleaders (its Spear Counterpart). A male Sexier Alter Ego will probably be one of these. When the bad boy is literally a monster, see You Sexy Beast. Contrast Endearingly Dorky and Weakness Turns Her On, where more timid, sweet, and "uncool" characters are seen as attractive. If the bad boy plays guitar, this will usually overlap with Artists Are Attractive. See Love Forgives All but Lust if the girl is willing to tolerate any wrongdoing on the bad boy's part except philandering.

is this trope taken to its Logical Extreme.