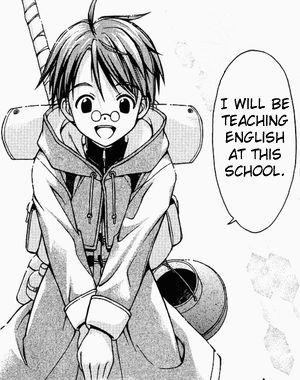 Ten years old, and more mature than his students.
This kid may not have even hit puberty yet, but acts as if always preoccupied with responsibility. They work hard at whatever they do and treat things seriously, but every once in a while they do indeed act like a kid (and hate the subsequent teasing). Usually not taken too seriously by anyone and hate being treated like a kid by adults, even if they secretly like the attention.
Advertisement:

Often their family situation is problematic. They might be a lonely only child, although they could also have a big sister or brother they respect and admire. The Adorably Precocious Child can attach to the closest adult who lets them, creating an Intergenerational Friendship, and often finding a Parental Substitute. This is especially common if they're also a Bratty Half-Pint. Sometimes this works in reverse, and the adult character may have to defend themselves against unwholesome comments by other characters by insisting they're Like Brother and Sister, or, more often, explain that the child is Like a Son to Me, or even a Replacement Goldfish for a dead relative.