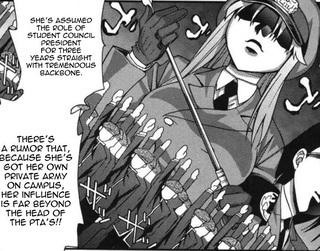 If the salute fits...
"Each student government possesses decision-making powers that outrank those of the board of directors, the PTA, and the faculty. It's a democracy of youth."
—CLAMP School Detectives

In real life, power in any American and Canadian school is in the hands of the principal, the faculty, and the school district. And of course, each school is subordinate to the power of state and federal courts. In England and Wales, it lies with the Headteacher, the Board of Governors, and the Local Education Authority. Other jurisdictions, including Scotland, may have their own arrangements. To create the illusion of students having power over their lives at school, student councils are forged. In truth, these groups are largely figurehead posts: the only real power they have is superficial, the actual election of these groups is basically one big popularity contest, and the only benefit is a student council slot on your college application under "extracurricular activities" and an extra picture in the yearbook.

In fiction, student council is Serious Business, with power worthy of corruption and abuse in the hands of those with evil in their hearts. Council members have unparalleled freedom — they do as they please on campus, invent arbitrary rules that punish the masses, and give themselves and their allies special privileges. No member of the staff dare rebuke them. In fact, the staff may rarely appear at all (see Two-Teacher School). Occasionally, their power will be checked by others, such as the School Newspaper Newshound. In the event that the student council is not corrupt and seeks to use their powers for good rather than evil, their rival will be the actual school administration, who will often butt heads with the council over the administration's own corruption/tyranny.

One thing that may or may not overlap with this trope is how the Yearbook Committee seems to have supreme power over the yearbook's content, despite the fact that in Real Life schools, administration would step in so that the students in danger of being hurt by the pictures would be out of harm's way.

Naturally, led by the Student Council President. If the student council is not only powerful but more powerful than the adults, then they have a Teenage Wasteland.

Note that in Japanese schools, this is an exaggeration of Truth in Television, as the Student Councils actually do have power over the approval and funding of student clubs. School Clubs Are Serious Business is a real thing in Japan, as they're meant to prepare students for the high-pressure work environment into which they'll eventually be dumped, and students are strongly encouraged to join at least one club. And just like in their future jobs, students are expected to show utmost loyalty to their club: once you join, you're there until you graduate. Likewise, in private schools in the United Kingdom, prefect councils often perform the same functions that an honour council fulfills at a university, and any year's prefects are assigned to keep order in the teacher's absence. Are you starting to see the clout Student Council can hold? (More details in the Real Life section below.)

This ranks low on the authority trope. For the other lower steps, see Club President and Class Representative. For the enforcers, see Yellow Sash of Power. For the next step up, see Student Council President.

It also isn’t exclusive to councils. For example, since a lot of works use a Two-Teacher School, cheerleading is usually run by the head cheerleader, when in real life, there would be a coach that comes up with the routines and decides who is on the squad.

Might be part of an Absurdly Powerful School Jurisdiction.