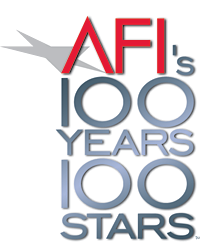 In 1999, the American Film Institute revealed their list of the top 50 greatest screen legends in American film history, part of the AFI's 100 Years... Series, naming it AFI's 100 Years... 100 Stars. This included 25 male and 25 female actors that were appearing on film in/before 1950, who had a significant screen presence in American feature-length (40 min) films.

It aired as a television special in 1999, presented by Shirley Temple (who also had an entry on the list) and a variety of famous movie stars that were popular at the time.

As of 2020, of the fifty stars listed, only two are still alive: one man (Sidney Poitier) and one woman (Sophia Loren).

The top stars of their respective sexes, Humphrey Bogart and Katharine Hepburn, both starred in the classic adventure film The African Queen, for which Bogart won his only Oscar.