Monster of the Week 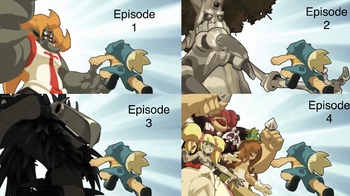 Episodes where the characters fight a villain and the whole story is wrapped up at the end, never to be dealt with again. Essentially, the Monster of the Week serves as the Big Bad of a single episode. Can be seen as the complete antithesis of a Story Arc, or a Story Arc compressed into one episode. Sometimes, use of a plot element like Arc Welding can bring together what appear to be unrelated threats, but other times they are established as being minions of the ultimate Big Bad from the start.

The term (a play on Movie of the Week) was originally coined by the writing staff of The Outer Limits (1963), which sought to distinguish itself from its biggest competitor, The Twilight Zone (1959), by promising viewers a new monster every episode. Out of its 49 episodes, only around 8 twisted or outright eschewed the formula.note "The Man Who Was Never Born" (where the "monster" is the protagonist), "The Hundred Days of the Dragon", "The Borderland", "Controlled Experiment" (where the central characters are two martians with completely human appearances and a time control device on hand, and they aren't evil), both parts of "The Inheritors", "The Form of Things Unknown", and "Demon with a Glass Hand".